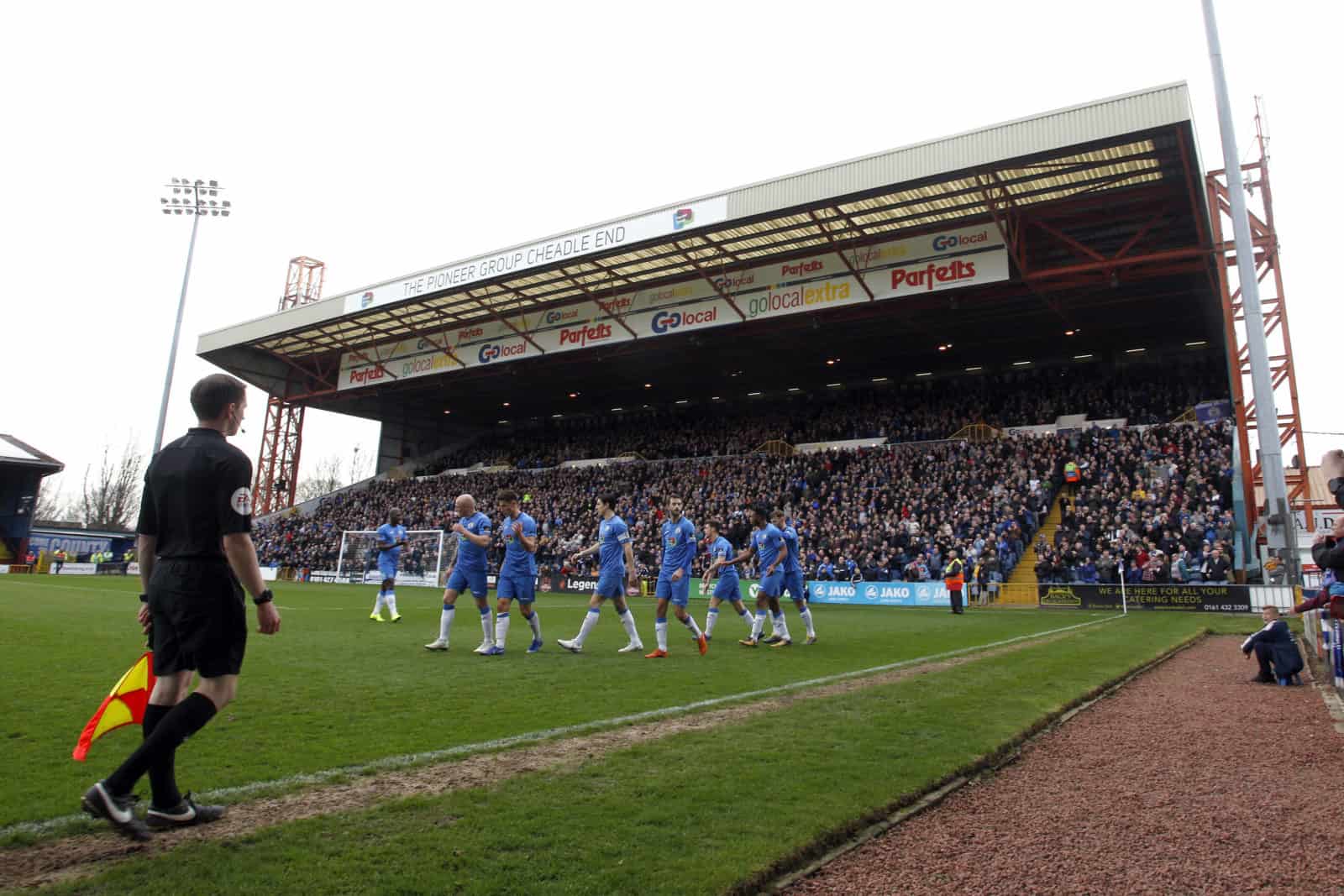 No Way To Wembley, As Hatters Edged Out In Reid-iculous Final Five Minutes

County’s FA Trophy adventure, and prospects of a Wembley visit, ended dramatically before another remarkable 6,000-plus attendance at Edgeley Park – as AFC Fylde, from the National League, went through by the odd goal in five, courtesy of Alex Reid’s late Semi-final winner.

That decisive strike capped an incredibly hectic late passage of play, during which the visitors – having cancelled out Nyal Bell’s first-half opener with a penalty just past the hour-mark – got their noses in front with a second goal five minutes from the end, before conceding Ash Palmer’s equaliser that had looked set to keep the Hatters in with a chance of extra time and the Final.

County took to the field on a pleasant, early-spring day in SK3 that contrasted starkly with the inclement conditions for the goalless first leg of the tie at Mill Farm seven days earlier. The Hatters’ starting 11 was unchanged from that occasion, although Frank Mulhern returned to the squad, and was named among the substitutes, following his one-match Trophy-suspension.

A corner for County – awarded after 27 seconds, but taken a couple of minutes later following a facial injury to Jordan Tunnicliffe – led to an early penalty shout, after Darren Stephenson’s shot hit the arm of visiting captain Neill Byrne, but play was waved on by Referee Stockbridge.

The Hatters nevertheless continued in attacking vein, as Scott Duxbury connected with an Elliot Osborne cross from the right to head straight at goalkeeper Jay Lynch, and Jordan Keane screwed a shot wide of the right post, before they took the lead with 25 minutes played.

Duxbury began the move from County’s half – breaking up a Fylde attack to feed Stephenson, who, in turn on the left flank, released Bell. The striker then twisted and turned towards the box, created some space for himself and unleashed a low shot past Lynch into the bottom-right corner.

Within two minutes, the ‘Coasters’ were almost level – courtesy of ex-Hatter Danny L Rowe’s free-kick from 30 yards that struck the crossbar. And in the immediate follow-up, they had a penalty claim turned down, after Danny Philliskirk went to ground under a challenge by Duxbury.

County had the ball in the net for a second time within seven minutes, as Palmer headed home Sam Walker’s corner from the right, but the acting skipper’s effort was ruled out for a push – again on Philliskirk – in the build-up.

As half-time approached, the Hatters sat deep as Fylde pressed – and, with four minutes of the half remaining, Ben Hinchliffe had to be at his best in tipping past the left upright Nick Haughton’s snap-shot from the edge of the box.

The visitors started the second half much as they had ended the first, albeit without translating their possession into clear-cut chances. And, in fact, the Hatters’ first attack of note following the break saw them go closest, when Osborne headed off target from Duxbury’s cross on the left.

Matty Warburton was introduced a minute ahead of the hour – and his first contribution, by way of an angled shot from the left, was parried by Lynch. But shortly afterwards, and following their first corner of the half, the Coasters were awarded a penalty when James Hardy was fouled by Duxbury. And Rowe duly stepped up – drilling his spot-kick to Hinchliffe’s left to equalise.

Free-kicks and corners provided the basis for best chances on the part of each side over the following 20-minute period, before a subsequent, and far shorter, spell that led to three goals.

With 85 minutes on the clock, Zaine Francis-Angol’s low cross from the left was fired past Hinchliffe from 12 yards by Ryan Croasdale – only for Palmer, three minutes later, to bundle home Osborne’s in-swinging corner.

And straight from the kick-off, Hardy weaved his way into County’s area – ahead of a challenge that saw the ball fall to Reid, who curled the game’s ultimate decider in off the post.

Man of the Match: Hinchliffe.