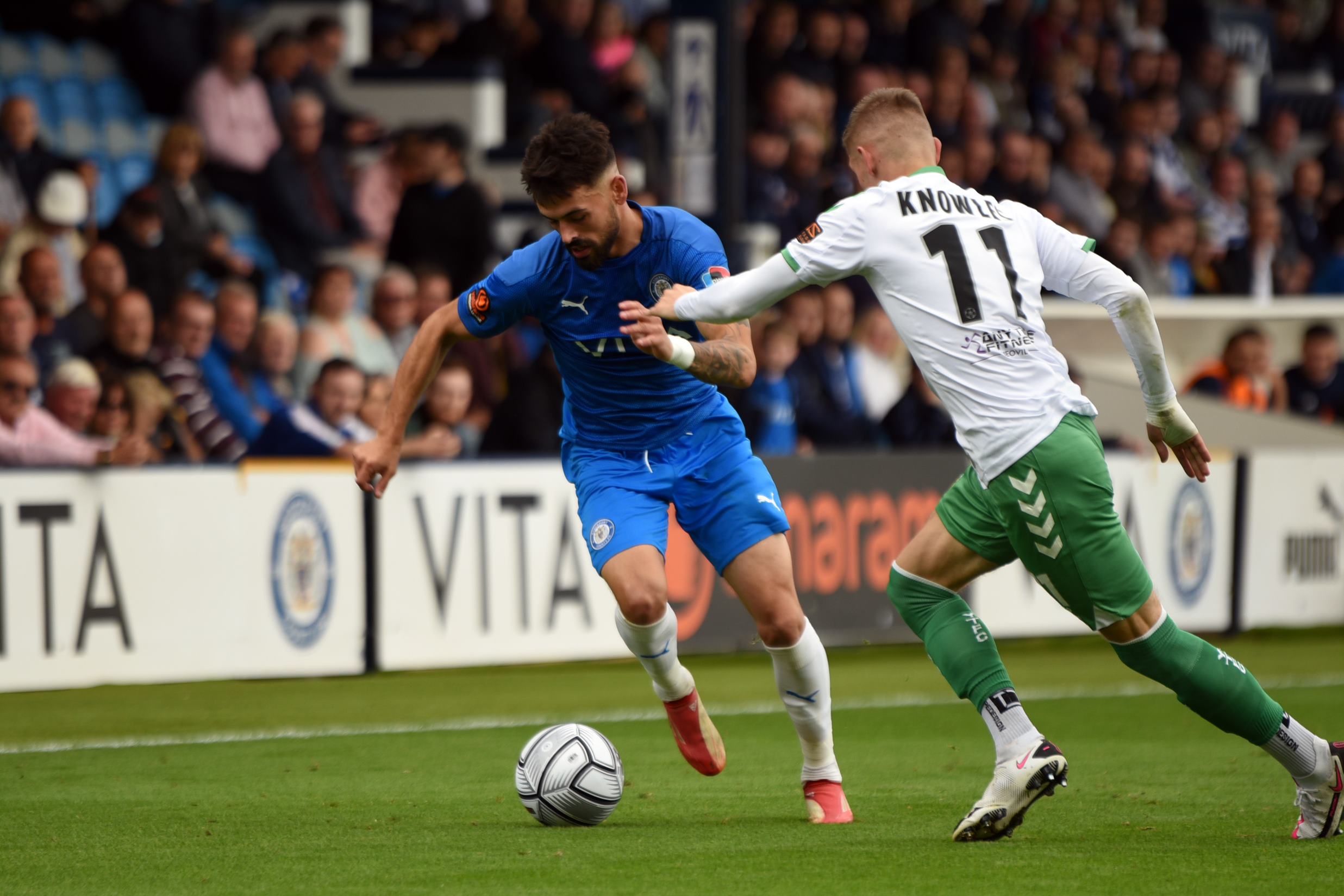 After a disappointing result last weekend, County are looking to flip the script on Saturday in a blockbuster encounter with Wrexham at Edgeley Park, with a big attendance expected at Edgeley Park.

That 3-0 reversal at Halifax last Saturday saw us miss the chance to close the gap to the play-off places, as we dropped a spot to 11th in the league table. We are currently four points behind the top seven, but have the chance to close that gap this weekend against Phil Parkinson’s team.

The Red Dragons, who have enjoyed a Summer of heavy financial backing from their Hollywood owners, hung on at the weekend to claim a crucial 1-0 victory against the then league leaders Dagenham & Redbridge, thanks to a solitary goal from statement signing Paul Mullin.

The Welsh side currently sit four points above County in 8th place, outside of the play-offs on goal difference after a mixed start to the new season.

Tickets for County supporters for this game are available to buy online now. To book your place for this big game between the pre-season promotion favourites, click here.

Having been relegated to non-league football for the first time in 87 years back in 2008, Wrexham are now incredibly in their 14th successive season in the fifth tier of English football, by some way the longest such stay of any side in the division.

During that time, the Club’s league finishes have ranged from 2nd down to 17th, but expectations of a return to the Football League have arguably never been higher for the side after their February takeover by Hollywood actors Ryan Reynolds and Rob McElhenny.

That change in ownership, and the heavy investment on and off the pitch since then, saw Wrexham installed as the pre-season favourites for the National League title, after just missing out on the play-off places last season.

Under the management of their former player Dean Keates, the side went into the final game of the season in sixth place after a strong second-half of the season and with a real chance of being in the mix for promotion perhaps earlier than expected under their new owners.

A failure to beat Dagenham & Redbridge on the final day of the season cost them dear though, as a 1-1 draw at the Racecourse Ground saw them miss out on the top seven by a point as both Chesterfield and Bromley leapfrogged them in the league table.

Failure to make the play-off places ultimately cost Keates his job, with the Club choosing not to renew his contract in the Summer. His replacement was experienced boss Phil Parkinson, with the former Bolton, Sunderland and Bradford City manager signing a 12-month rolling contract.

He’s been heavily backed in the transfer market too, most notably with the signing of last season’s League Two Player of the Season, Paul Mullin. The forward enjoyed a sensational season for Cambridge United last year, scoring 34 goals in 50 appearances to help them to promotion to League One.

He has been joined up front by Jack Hyde, who has joined from FC Halifax Town for an undisclosed fee. Both have started the season well for their new Club, scoring three goals each so far. At the back, Cheltenham Town’s title winning captain Ben Tozer has been brought in brought in, alongside Carlisle defender Aaron Hayden – both for undisclosed fees.

A former County man has also joined the ranks in the shape of Liam McAlinden, who had a short spell with the Club during the 2019/20 season, scoring twice in nine appearances for the Club.

Despite those additions, it wasn’t quite the flying start to the season that many expected for Parkinson’s side as they drew three of their first four games, winning at Eastleigh but being held by Solihull, Notts County and Southend.

Since then, they’ve managed two narrow 1-0 home wins against Woking and against Dagenham at the weekend, either side of suffering their first defeat of the season away at Grimsby Town, leaving them with 12 points from their opening seven league outings.

Our Match Sponsor for this game will be Delivery App. We’d like to thank them for their fantastic support.