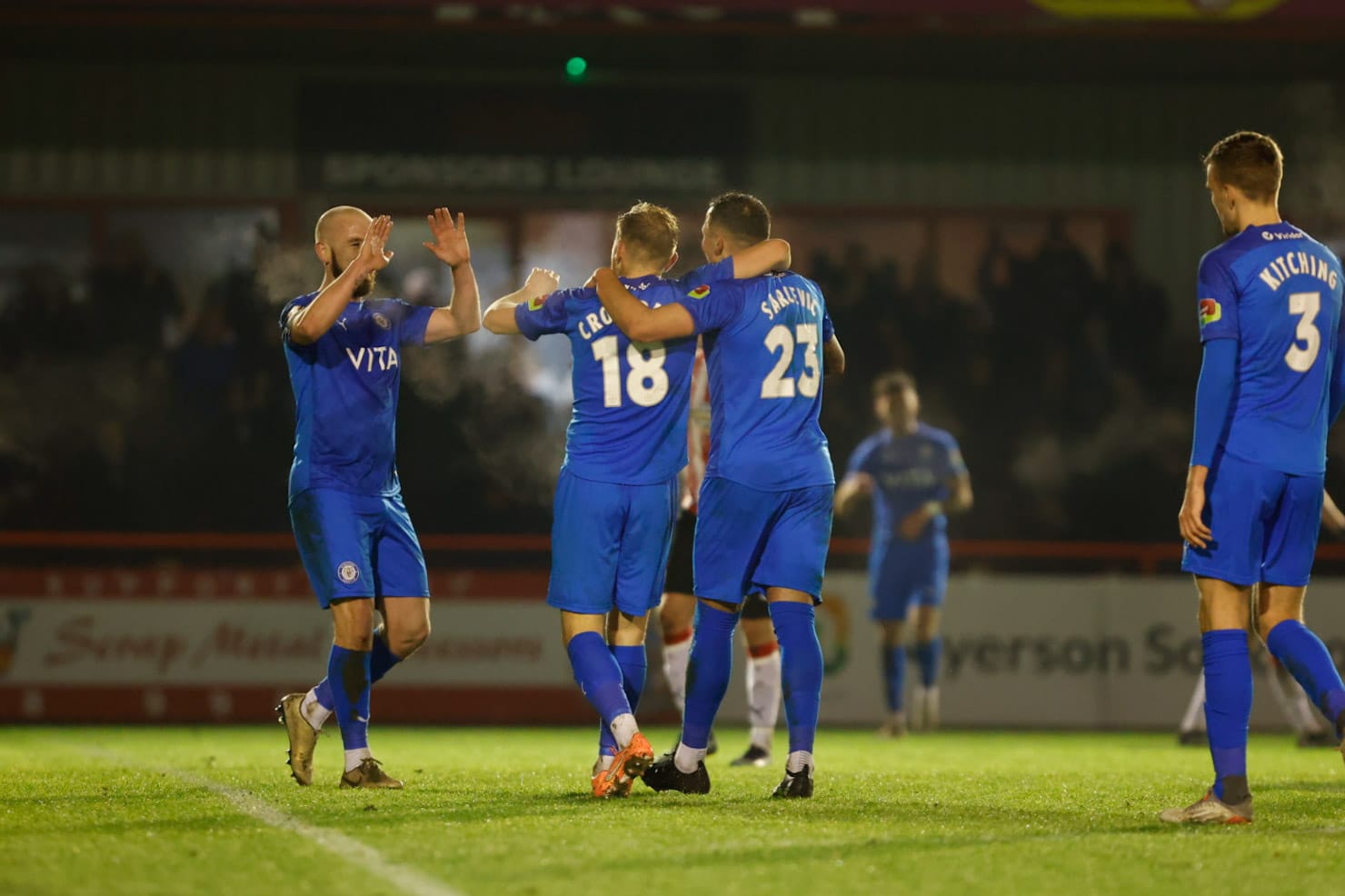 The Hatters’ delayed inaugural game of 2022 and their first competitive match action in a fortnight saw them return back up to within touching distance of the play-off positions after completing an emphatic ‘double’ at near-neighbours Altrincham.

First-half goals from Antoni Sarcevic and Will Collar put them in control for the second instalment of the Cheshire derby, which had been postponed on 3rd January after the home squad was impacted by illness and injury – and following County’s 5-1 Boxing Day victory in the SK3 reverse fixture.

Paddy Madden then tucked away a penalty shortly after the interval, and Ryan Croasdale headed in County’s fourth, ahead of an injury-time goal for the ‘Robins’ to reduce their arrears.

County took to the field showing just one change from the starting line-up at Solihull two Tuesdays previously – with Sarcevic, having served his one-match suspension, returning in place of Ollie Crankshaw. New signing from Port Vale, Ryan Johnson, was named among the substitutes, whilst an ex-Hatter most recently of Stevenage, Elliot Osborne, who had arrived at Moss Lane since the turn of the year, started in midfield for the hosts.

With just over a couple of minutes on the clock, County created the evening’s first chance – as Ryan Rydel’s cross from the left was headed wide of the far post by Madden.

Greater drama was to follow at each end within another four minutes – starting at County’s, where a defensive mix-up found Ben Hinchliffe away from his goal, and Josh Hancock with it at his mercy after being fed by Dan Mooney. But Hancock was ultimately thwarted by captain Liam Hogan, who cleared the ensuing shot off the line.

The Hatters responded to the scare by launching an immediate counter-attack, and duly took the lead after Madden’s cross from the left was delivered first time into the six-yard box from beyond the far post by Collar and converted by Sarcevic.

County then went close on two further occasions, and in each instance following a delivery by Macauley Southam-Hales from the right – with Scott Quigley glancing a shot beyond the far upright, and Madden propelling a header into the arms of home goalkeeper Tony Thompson.

Just ahead of the half-hour mark, County had a penalty shout when Quigley went to ground in the hosts’ box under a challenge by Tom Hannigan – but the appeals were promptly waved away by Referee Davies.

A foray into the Hatters’ area by Altrincham found Hancock in space, but the striker fired high and wide into the end housing a sell-out County following. And Toby Malarkey latched on to a Ryan Colclough cross from the left to fire straight at Hinchliffe.

But just as the Robins were looking to establish more of a foothold in the game, County doubled the advantage two minutes ahead of the break – with Collar advancing from the halfway line, before unleashing a shot into the top-right corner from 25 yards for his fifth goal in as many games.

Upon the resumption, the Hatters soon went close to making it three – with only Thompson’s feet  preventing Kennedy Digie turning into his own net a low cross from the right by Southam-Hales.

But their wait for a third goal was short – as, with three minutes of the new half played, Collar was brought down in the box by Andy White, and Madden sent Thompson the wrong way from the penalty spot.

Croasdale fired over from outside the area, and Sarcevic had a goal-bound shot deflected past the right post by Digie, as County continued to press. And six minutes after the hour, County had a fourth, when Croasdale rose unmarked to head home a cross from the right by Southam-Hales.

The Hatters continued to create chances in the final 20 minutes – as a Madden shot fizzed over and one from Southam-Hales squirmed around the left post. And a subsequent rally by the hosts during the closing stages initially featured efforts by Hancock and Hannigan that cleared County’s bar, before substitute A-Jay Leitch-Smith’s strike deep into stoppage time produced a late, late consolation.

[Debut for Ryan Johnson, with a unique SCAN (Stockport County Appearance Number) of 1426.]