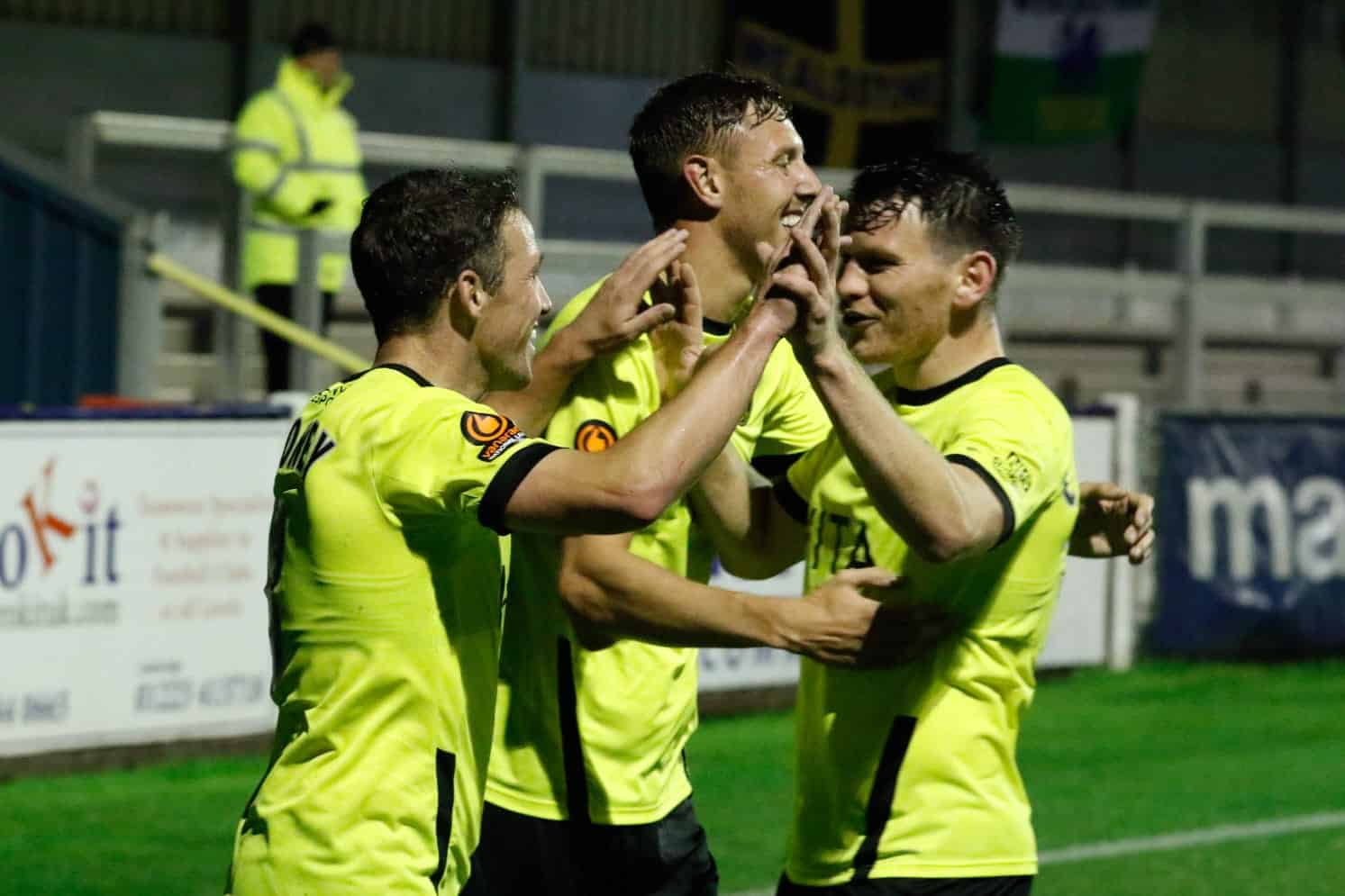 A stunning hattrick by John Rooney sealed a second-half fightback by The Hatters at Wealdstone, as Jim Gannon’s side romped to a 5-2 win to seal a third successive victory in the National League.

Despite twice falling behind either side of the interval to goals from Michee Effeto and Ross Lafayette, Rooney’s treble along with first goals for the club from Richie Bennett and Lois Maynard earned County a first away win of the campaign.

With Gannon’s men playing their fourth game in ten days via their first ever trip to National League South champions Wealdstone, Gannon opted for two changes from the side which eased past Dover 3-0 – with James Jennings and Alex Reid replacing Mark Kitching and Jamie Stott, who suffered a broken nose in Saturday’s win.

The man in form Rooney went close twice early on as County settled into possession from the outset, with the former Barrow man firstly striking the base of the post after running from deep to drive into the box.

Bennett fired over from Alex Reid’s cross on the back of Rooney’s near miss, before the lively Rooney danced his way into the area and saw a close-range effort blocked inside the six-yard box.

It was against the run of play, then, when the hosts took an early lead. Playing predominantly on the break, Michee Effeto was released down the right to cross high for Jorome Slew to loop a clever header over a helpless Ben Hinchliffe.

In keeping with the pattern of the game, County continued to press despite the early blow, and parity was restored just five minutes later when Connor Jennings’ goal-bound strike was handled by defender Connor Smith.

Rooney stepped up to slam home his second penalty in as many ties, with County having had no competitive spot-kicks in eighteen months prior to Saturday’s win over Dover.

County spent the rest of the half searching for an elusive lead, with Alex Reid denied at the near post after a low cross by Minihan – although The Hatters’ dominance came more by way of possession than any clear-cut chances up until the break.

The Hatters resumed for the second half looking to capitalise on their possessional domination, only for Wealdstone to restore their lead when striker Ross Lafayette pounced on a mix-up at the back to slot home from close range.

County came close to an instant leveller, when a low cross by Liam Hogan sparked a goalmouth scramble resulting in Sam Minihan’s goal-bound effort taking a deflection and flying agonisingly away from goal.

Kicking down the pronounced slope in the second half, County continued to search for a second leveller of the game – with Maynard surging forward from deep to drill a low effort goalwards, only for Stones stopper Isted to smartly palm away from danger.

With time running out, Ash Palmer saw what looked a certain equaliser clawed away magnificently by the increasingly busy Isted, before County grabbed a second deserved leveller when Mark Kitching burst superbly down the left and crossed low for Bennett to drill low past Isted.

And in a hectic end to the game, the tireless Maynard pounced to drill home after another goalmouth scramble, and give County their first away lead of the season just 90 seconds later.

The comeback was well and truly complete just five minutes later, as Rooney grabbed his second brace in as many games – latching onto Richie Bennett’s flick and smashing past Isted.

And the man of the moment Rooney sealed a quite superb hattrick on 88 minutes, collecting the superb Bennett’s cutback to roll past Isted with his left for County’s fifth.

The Hatters move to second in the National League table early in the campaign with a big win in North London, ahead of Saturday’s trip to Chesterfield (live on BT Sport).