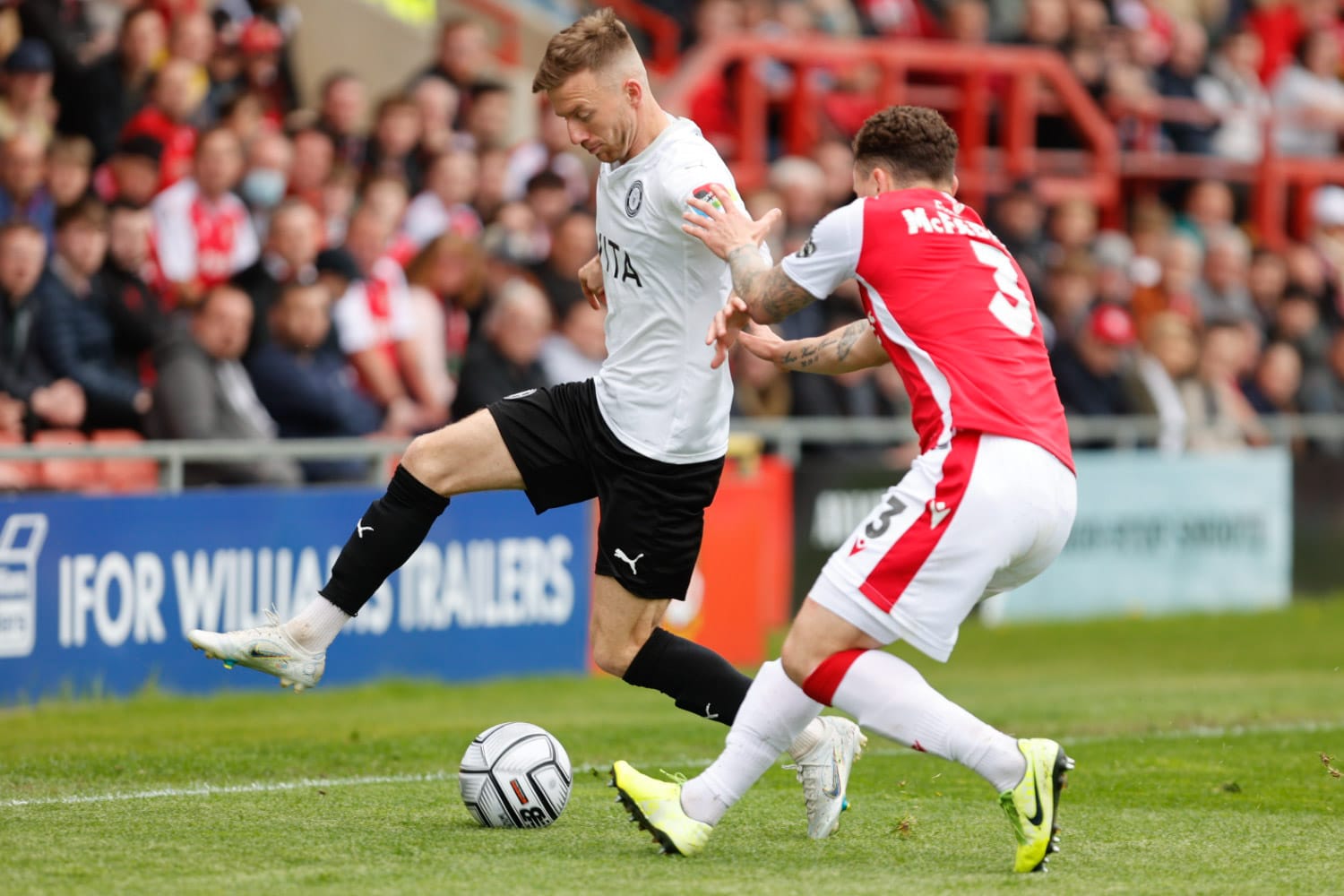 The Hatters had a Sunday to forget in North Wales, as they were well beaten by their automatic promotion rivals in front of a sell-out crowd at the Racecourse Ground.

Two first-half goals for the ‘Red Dragons’, followed by a third just after the re-start, put them in control of the contest and ultimately saw them climb above County to the top of the National League on goal difference – leaving the Hatters, with a game in hand, needing four points from their two final fixtures to make sure of the title.

County took to the field for a lunchtime kick-off with the television cameras in attendance, and showing three changes from the line-up that had started at Chesterfield six days previously. Skipper Liam Hogan was recalled, together with Scott Quigley and Ryan Rydel – replacing Andy Cannon, who was named among the substitutes, as well as the injured Courtney Duffus and Ryan Johnson.

As had been the case just over five weeks earlier for the FA Trophy-tie at the world’s oldest international stadium still in use, the hosts’ squad included two former Hatters – with Christian Dibble starting between the sticks and attacker Liam McAlinden named among the substitutes.

A patient build-up by the Hatters with just under 10 minutes played saw them fashion the afternoon’s first chance, culminating in a low drive by Myles Hippolyte that Dibble gathered at the second attempt. And five minutes later, Hogan’s cross on the left picked out Antoni Sarcevic – whose shot beat Dibble, only to be headed away from goal by Max Cleworth.

One-time Red Dragon Quigley was next to try his luck for County as he rounded Dibble to the right of goal – but the home ‘keeper managed to get a glove to the ball and avert the danger. And at the other end, Ben Hinchliffe was called into action for the first time in a big way – brilliantly tipping over Paul Mullin’s overhead kick, following a trademark Ben Tozer long throw from the left.

After Cleworth headed wide from the resulting corner, and with the game opening up, Paddy Madden sent a miscued shot beyond the far post after being set up by Elliot Newby’s delivery from the right.

With 11 minutes of the first half remaining, Wrexham broke the deadlock, as another Tozer throw-in – from the right this time – found Ollie Palmer, who headed home inside the near post.

Hinchliffe was called upon again to thwart Mullin, after the striker had broken through on the right – with County’s Number One parrying the angled shot clear. But in added time, he was unable to prevent the forward from doubling the lead from a similar position, after the leading Wrexham scorer had been played through by Jordan Davies from the halfway-line.

Upon the resumption, the Hatters replaced one of their former Wrexham players with the other, as Connor Jennings was introduced for Quigley. But no sooner had Jennings had set foot on his old stomping ground than Ollie Palmer had a second goal to his name and the Red Dragons a third to theirs, as the hosts’ record signing glanced in Luke Young’s free-kick from the right.

As County strove to reduce the arrears, Madden, and Hippolyte with a free-kick, fired over – but the hosts were simultaneously looking to increase their advantage, and Davies went close with a free-kick that whistled past the the left upright.

Clear-cut opportunities for the Hatters were at a premium as the contest its latter stages – although Hogan and Madden headed respective attempts high and wide, and Jordan Keane blasted a shot over – and Hinchliffe made one further save at the away end late on, parrying a well-struck shot by Tozer.