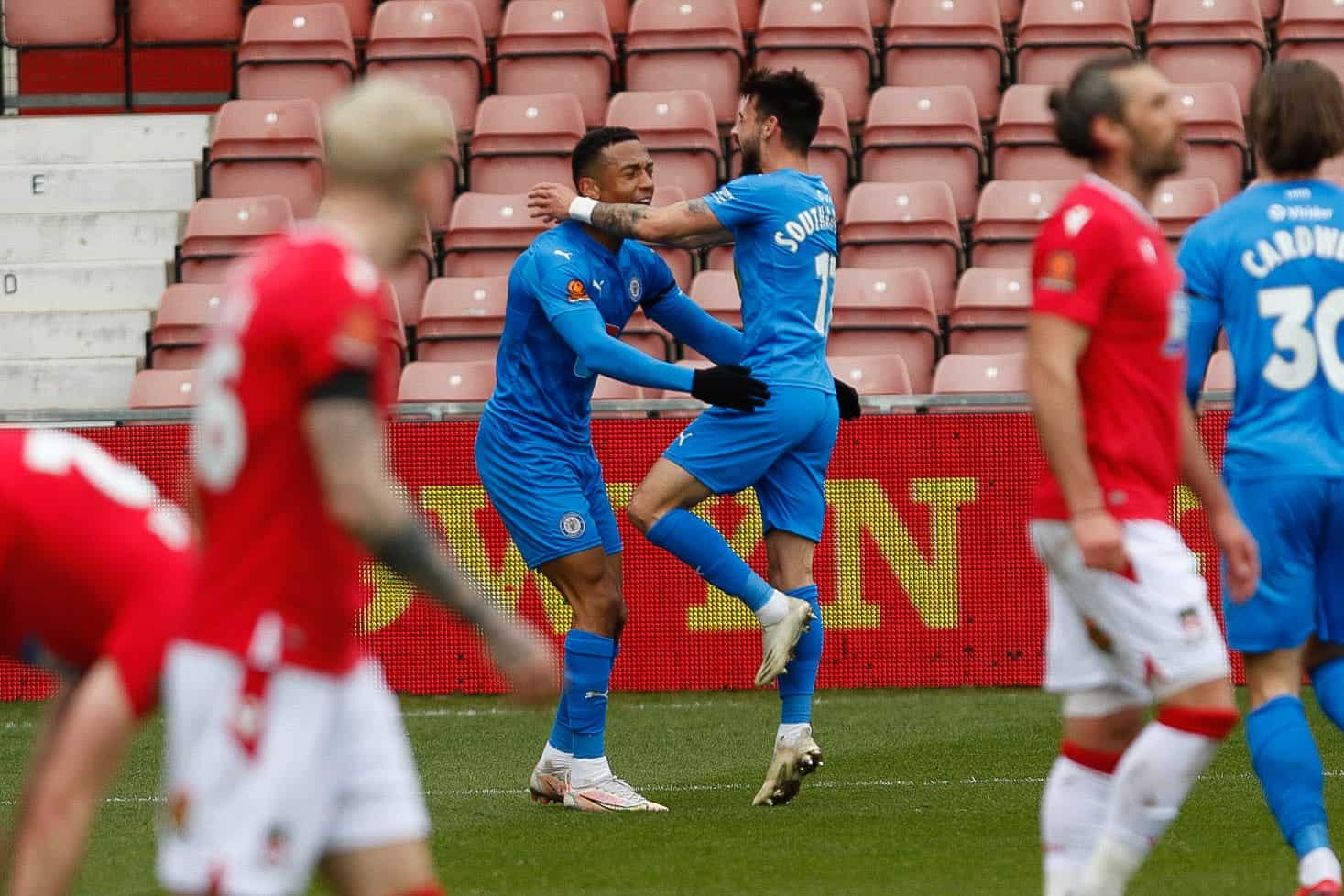 A first-half double by Alex Reid set County on the way to a superb 0-3 win at Wrexham in the National League, as The Hatters extended their unbeaten run to eight games with a resounding three points at the Racecourse.

Following Monday’s frustrating draw with Bromley at Edgeley Park, John Rooney added to Reid’s brace in the second half to seal a big victory on the road for County, who solidified their position in the play-offs.

Boss Simon Rusk named a starting line-up showing a solitary change to the side which started in Monday’s stalemate, as Reid returned to replace midfielder Will Collar, who took a place on the bench alongside Lois Maynard, featuring for the first time since returning from international duty with St. Kitt’s & Nevis.

A minute’s silence was observed prior to kick-off by both sides following the sad news of the passing of HRH Prince Phllip – and following a warm-up in which both sides donned t-shirts showing their support for Hatters (and former Wrexham) forward Connor Jennings in his ongoing battle with a rare form of cancer.

The warm sunshine at the Racecourse had all the hallmarks of last season’s memorable 1-2 win at the same ground – but it was Dean Keates’ men who started the brighter of the two sides in this one when striker Dior Angus saw back-to-back efforts blocked by former Wrexham man James Jennings inside the area.

With a quarter of an hour gone and the home side looking more likely, route one did the trick for County when Ben Hinchliffe’s long ball fell in behind for another former Wrexham man in Alex Reid – following good pressure from Harry Cardwell – with Reid flicking past Christian Dibble to give The Hatters an early lead.

The third former Wrexham representative in the County side then went close as John Rooney fizzed one over the bar, with that early goal seeming to give County some impetus in the affair.

A big handball appeal was waved away inside the Wrexham area as Paddy Madden looked to get his shot away soon after, but County did have their second just moments later.

Skipper Liam Hogan did superbly to press the hosts high, force the error and see possession conceded to John Rooney. Rooney found Tom Walker out wide, with the Harrogate loanee’s cross headed on by Harry Cardwell and converted at close-range by the lurking Reid.

Things almost got even better for County when Walker again breezed down the left and crossed for Madden to sting Dibble’s palms with a volley from inside the area moments later, as The Hatters continued to probe on the break.

The hosts, who saw their bright start fade somewhat as the half rolled on, saw an effort dribble harmlessly wide of Hinchliffe’s goal via the left boot of Jordan Davies, and Rusk’s side made it into the half-time interval with their two-goal lead intact.

County resumed for the second half without any changes made at the break, with top goalscorer Reid looking to add to his tally – two for the day, and seventeen for the season, thirteen of which had come in National League action.

One of Reid’s strike partners on the day, Paddy Madden, almost had County in for a third on the hour mark when the former Fleetwood forward released Macauley Southam-Hales in on goal, with only the heavy touch of Madden’s former Fleetwood teammate seeing the ball roll unfortunately out of play in a good position.

Fiacre Kelleher glanced a near-post header off the post and away following a Jamie Reckon corner as the hosts started to run out of time to reduce the deficit, whilst Rooney saw a fierce drive blocked en route to goal at the other end.

As the hosts committed men forward, however, it left space open for The Hatters – space which was gladly taken advantage of with twenty minutes remaining.

Ryan Croasdale cleared a near-post delivery, with the sheer pace of Southam-Hales beating captain Mark Carrington to the ball. Southam-Hales raced clear on goal from his own half, with the Welshman hacked down inside the area.

Referee Andrew Kitchen pointed to the spot, with Rooney stepping up to slot his first goal since returning to the side from injury low past a helpless Dibble.

Reid almost had a superb hattrick when he curled inches wide of the far post into the 75th minute, while Harry Cardwell also saw a close-range effort deflected wide of goal.

Elliot Newby and Lois Maynard entered the fray late on as The Hatters looked to ease their way to an impressive three points, whilst Sam Minihan replaced the tireless Harry Cardwell.

James Jennings almost made it a remarkable treble of former Wrexham goalscorers when he curled a free-kick agonisingly wide of the near post into the last minute, before Maynard drilled a volley over the crossbar in stoppage time.

Despite that late pressure, The Hatters settled for their three-goal haul and secured a fine victory in Wales – thanks to Reid and Rooney at the Racecourse.