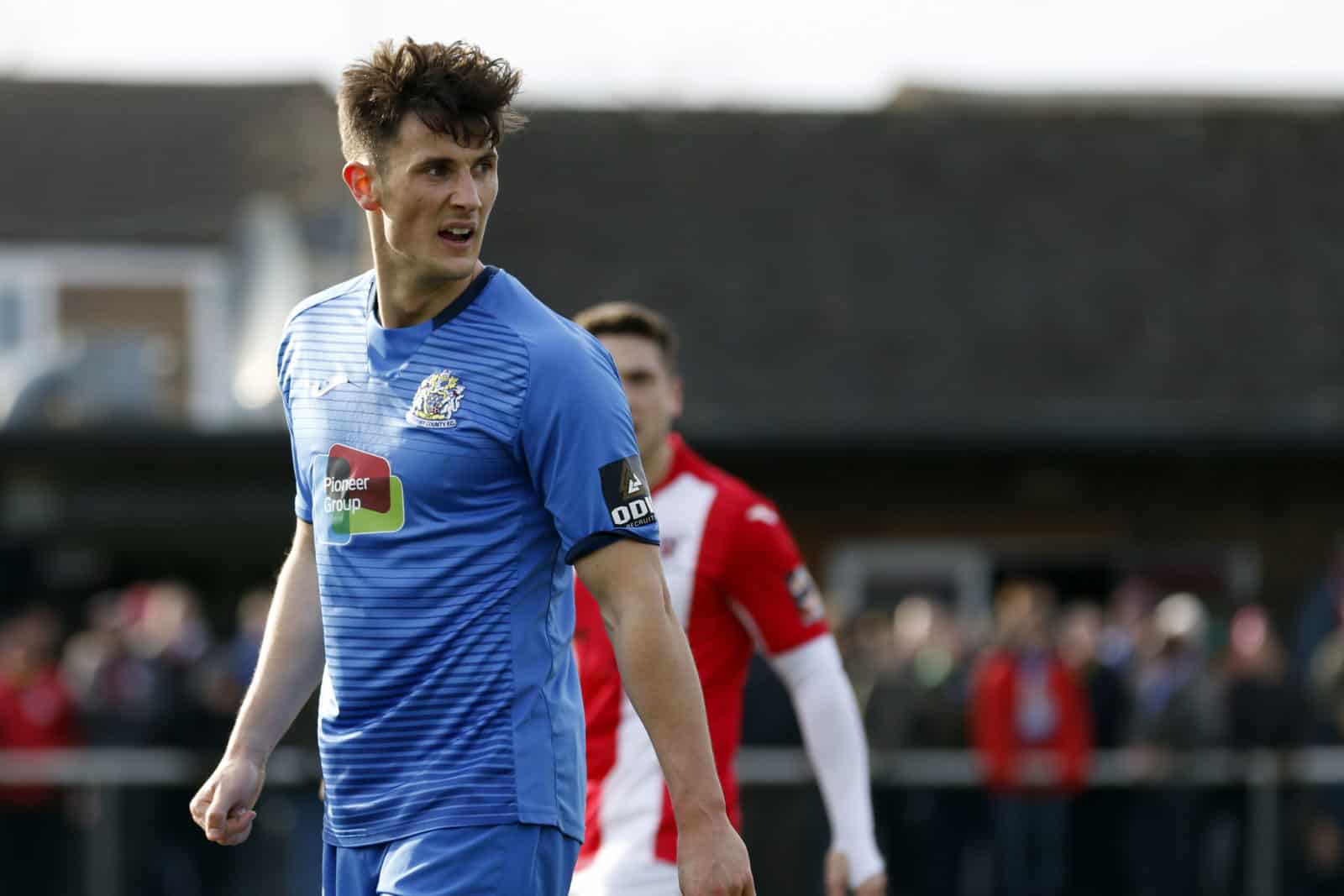 County’s club record-equalling sequence for a single campaign of 16 unbeaten league matches – and 23-game run without loss in all competitions – was ended by a single-goal defeat at Brackley.

Lee Ndlovu’s strike 14 minutes from time for the fourth-placed ‘Saints’ ultimately settled an often-disjointed contest of relatively few chances – as well as knocking the Hatters off the top of the table and back into second, a point behind returning National League North leaders Chorley.

The previous three matches had each seen five or more changes to the most recent County starting line-up, and the fixture at St James Park followed suit – with Lewis Baines, Sam Minihan, Sam Walker, Elliot Osborne and Jake Kirby forming a quintet of replacements within a 4-2-3-1 formation for, respectively, Scott Duxbury, Adam Thomas, Paul Turnbull, Matty Warburton and Darren Stephenson.

With precious points at stake, and conditions gusty, it was perhaps to be expected that a cagey affair would ensue. And so, indeed, it was for much of a first half that saw no corners awarded and scoring opportunities at a premium.

A couple of outrageously nonchalant pin-point passes by former County favourite Carl Baker made light of a bobbly playing surface in the first minute. And Baker also executed the game’s first chance, when, with a quarter of an hour played, he connected with a cross from the right by Ellis Myles – but the ex-Hatter’s volley lacked pace and was easily gathered by Ben Hinchliffe.

Up the other end, Frank Mulhern provided the slow burner of a game with two sparks. After 19 minutes, he charged down a clearance by goalkeeper Danny Lewis that ballooned back over the crossbar. And three minutes later, Dan Cowan’s through-ball following a free-kick found Mulhern whose snap-shot was palmed back by Lewis – before Minihan fired high on the rebound.

As half-time approached, Ndlovu drilled just wide of the right post from the edge of the box – while, for County, Mulhern’s cross from the right was headed into the far side-netting by Osborne, and Sam Walker (one of three players in action sharing a surname, along with Brackley’s Adam and Glenn) blasted over from 20 yards.

The Hatters brought on leading scorer Warburton upon the resumption – necessitating the first of three second-half positional changes for Osborne – although the contest continued to shy away from becoming an attacking spectacle ahead of the hour-mark.

After 63 minutes, Ndlovu was played through by Shane Byrne’s header – but Hinchliffe stood tall to catch the former’s half-volleyed strike. A minute later, Sam Walker fired narrowly over – before a Warburton free-kick from just outside the box stayed too low and was blocked by the home wall.

The game’s decisive moment arrived when Matt Lowe turned inside Baines on the right and squared to the recently-introduced Luke Fairlamb. The substitute’s shot was parried by Hinchliffe – only for Ndlovu to react first and hook home on the volley for his 19th goal of the campaign.

With the contest now destined not to be their first no-score draw since September 2017, the Hatters strove for an equaliser that might avoid a first Saturday reverse on the road in over 13 months – albeit against hosts who had won the previous five matches on home turf.

With five minutes of normal time remaining, County went close to salvaging a point as substitute Thomas headed down to Osborne, who let fly towards goal with a stinging shot. But Lewis kept out the effort – and Myles’ goal-line clearance from a follow-up header by Muhern was rendered academic when the striker was flagged offside.